Fear of the Walking Dead.

Acting innocent, trying to blend, look like a local or a regular visitor, someone possibly walking, in my case, an imaginary dog, I wait for the lone car to pass down this quiet, dusty road. As soon as it is out of sight, with pounding heart and sweat pouring (it is Spain and really hot) I scramble through the hole in the fence and into a scene from The Walking Dead.

Welcome to Camping Aguas de Lliria. Contentiously and rapidly abandoned in 2009, the site is a ghostly reminder of what was a large campground with some permanent residents. I am not sure how long it was open but this website suggests it was running for at least 15 years before the council at, very short notice, closed it down for supposedly not having a permit when it was originally built, locking residents and holiday makers out.

On reading the website I was shocked to see the place had been closed for so long. There is lots of rubbish and some vandalism, but nothing that says almost 10 years have passed. Perhaps its isolation and the dry weather has allowed for some level of preservation? We will see.

Before venturing to the campground I wanted to check the abandoned house I visited last year. There was an old stuffed chair in one of its three rooms and I hoped it was still lurking, lumpen, in the corner. I approached cautiously again, a little nervous. I didn’t want to run into the owner. I now know this is private property and being semi-rural the likelihood is no one speaks English. My Spanish is worse than poor, even the words I do know come out sounding mangled, dulled by my flat New Zealand accent. Unintelligible.

Approaching, I saw a stuffed chair outside the front door, someone had tried to burn it, stuffing had been ripped, but it had been resilient to their attempts. I was pleased, this was not the end I wanted for my chair. I wanted a long slow gradual decay, perhaps to be found by future generations, still lurking, lumpen in its corner.

Passing inside the door, over broken glass and other detritus I discovered the outside chair must have been the twin of mine, for there mine was still lurking, still lumpy and tatty; but mostly complete. Unburnt, unmoved, still dignified. Still in the corner where I first found it.

People have been here since I last came, there is more damage to the interior, more rubbish on the ground, dead fires, empty and smashed bottles. Signs of small parties, youthful nights, exuberance and stupidity. Sometimes I miss those days. 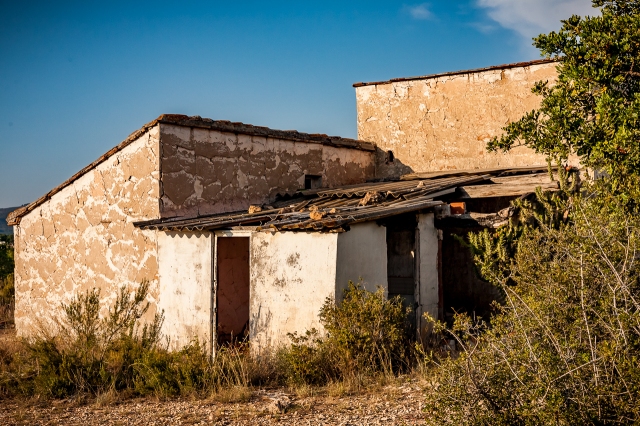 I start to head in the direction of the campsite, discovering I am not too far from a road, and a house. A car comes down the road and stops. I am standing on the edge of a ploughed field, sort of behind a small scrubby tree, a man gets out of the car, though just walks to, and then in to, the driveway of the house. Phew. I beat a hasty retreat, back over the slight ridge, past the house and up a small rocky trail to some old gates that I know, from last year, lead to land that is open and used by locals to walk their dogs. 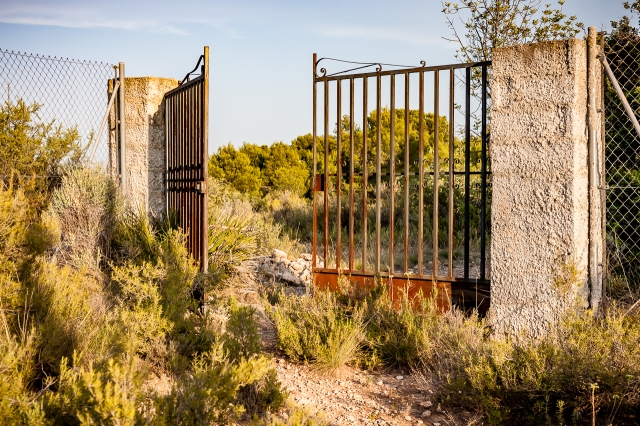 I feel more certain of my legitimacy and stop to take some photos of the grass and these weird little plants that I like the look of, but have no idea what they are called.

Soon I am walking down the road, along the fence line of the campsite, looking for entry points; maybe rapid exit points if needed later. I find a way in, a gap big enough to get through quickly. Just as I approach, a car comes down the road. I start to walk purposefully, innocently, waving to the driver as he passes, slowing immediately he is gone. I wait till the car is out of sight, then turn back and quickly enter into the campground, into a scene from The Walking Dead, thankfully without the flesh eating zombies.

It immediately feels strange, as if crossing through that chain link fence has crossed me into another less joyful dimension. It ‘feels’ quiet, deserted. Both are good things, hopefully reality will match the feeling and I will not come across anyone or anything that presents a danger.

I get the camera out of my bag, I have bought the old 5d with a 50mm lens, nothing fancy, no big heavy lenses and nothing that would get caught on the fence if I have to make a hurried exit. There is a surprisingly large amount of stuff, the result of the rapid departure of the people who lived here.

There has been some vandalism, though I am surprised at the condition after nine or so years of desertion, there are even some windows that have not been smashed. Though there is a ton of rubbish strewn about. 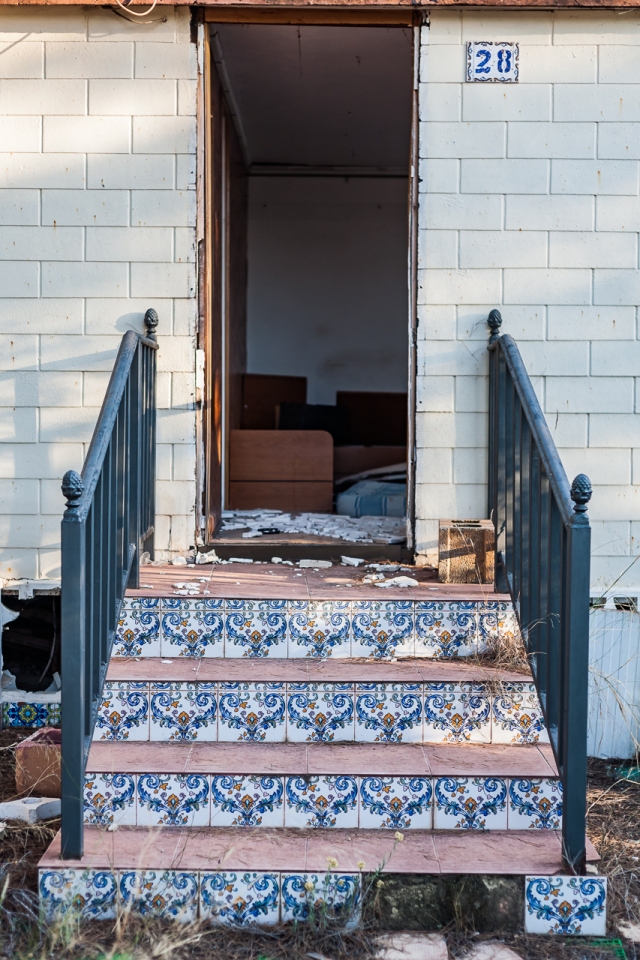 I can see people have dossed/camped or hidden away here over the years, small fire pits are scattered here and there. I am guessing the council or the original owners used to sweep through here in the early days. Numerous holes in the fence have been repaired, but more have been made and I spotted three or four as I walked down the road, keeping an eye on escape points.

I am still a bit nervous, I worry about wild dogs, and wilder people. The image of disturbed zombies does not leave my mind. I know these things do not exist, but… 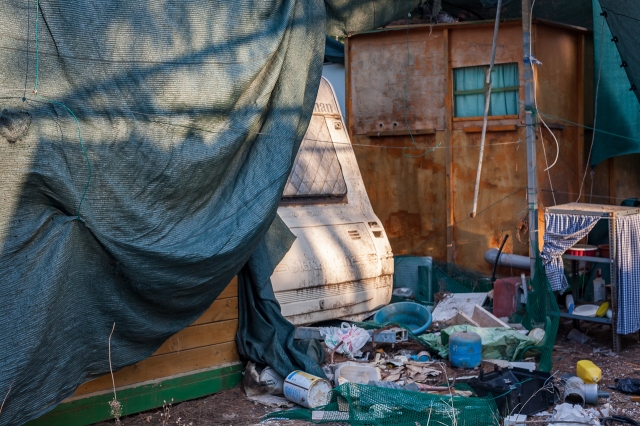 I do not wander too far in, I am not that courageous. The place is massive, far bigger than it looks from outside, a large portion has been burnt down, though none of the fixed dwellings look fire damaged. There is some irony to be found. 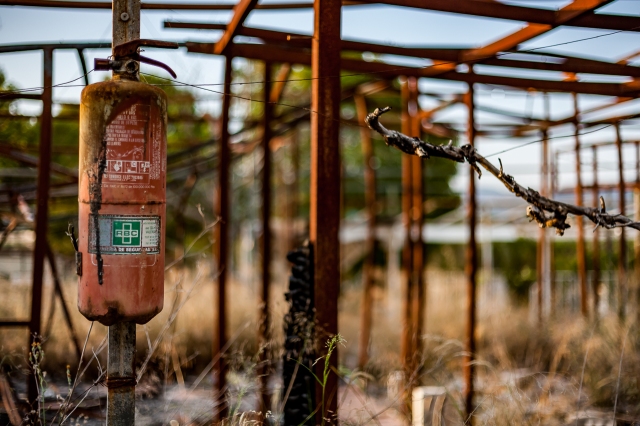 After thirty minutes of quiet skulking I decide to leave. Heading back to the hole I came in, I walk up the road to the chained entrance. Stopping to take a photo through the gate. A final reminder that my fears a zombie apocalypse had occurred as I crossed dimensions were not entirely unfounded. It was good to be back in the real world again. I think. 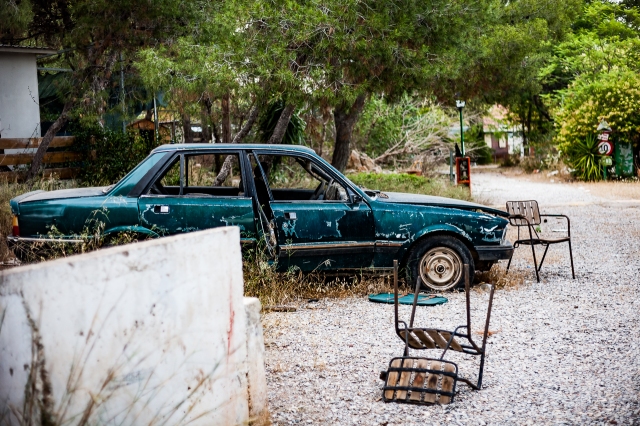 Originally from Auckland, New Zealand, now living in London.
View all posts by wheresphil →
This entry was posted in Blog, Spain and tagged abandoned, Camping Aguas de Lliria, derelict. Bookmark the permalink.
%d bloggers like this: