It is hard to believe it is Easter Friday again, another year gone. Sri Lanka is a secular Buddhist nation so there is no mass celebration of Easter here and life continues as normal. This of course means no hot cross buns or chocolate rabbits, which I am not sure is a good thing or not.

As I said yesterday I had a lousy sleep in this sauna of a hotel room – and yes I could have taken the air con room, hindsight says that would have been the right option – but I have yet to use one in Sri Lanka, so I did not think I needed it. A good rain and the humidity will  disappear, for a while. But a lack of sleep did mean a nice time talking, via email, with El back in London before I had to drag myself off the bed and into a cold shower at 4:30 am. It was game drive day in Yala National Park and Benne and I were being picked up at 5:00. We were also moving on after the game drive so I had to pack everything up so the hotel owners could take my pack to their store room once they were up.

We had arranged to share a jeep with Adam and Jules, an English couple we met on the bus yesterday. It halved the cost of the vehicle for Benne and I and made it a much more attractive option than doing it solo. They were a wee bit late picking us up and we ended up spending almost thirty minutes on the side of the road outside the hotel. 5:00 is a very busy time on the main roads in a safari town!

Yala is the biggest of a number of national parks in Sri Lanka and is probably the most visited. It has all the usual suspects for Sri Lankan game drives – elephants, leopards, crocs, buffalo and a gazillion different kinds of bird. I had mixed expectations, I have read and heard stories of people seeing nothing but birds and stories of leopards and elephants galore. I just hoped to see elephants – experience says do not have high hopes of leopards!

The park is about 30km from Tissa and we briefly stopped near one of the lakes for a sunrise shot, I haven’t seen too many sunrises on my travels; or sunsets either  to be honest. I am not a particularly good travel photographer!

We stopped at the ticket office amongst the masses of other jeeps, I was initially thinking this was just going to be one long jeep train, but was pleasantly surprised that once the Sri Lankan Micheal Schumacher got us in to the park we were mostly alone.

There was this tiny wee crocodile in a pond near the entrance. I did see one large croc but it was too far away to take a photo of. 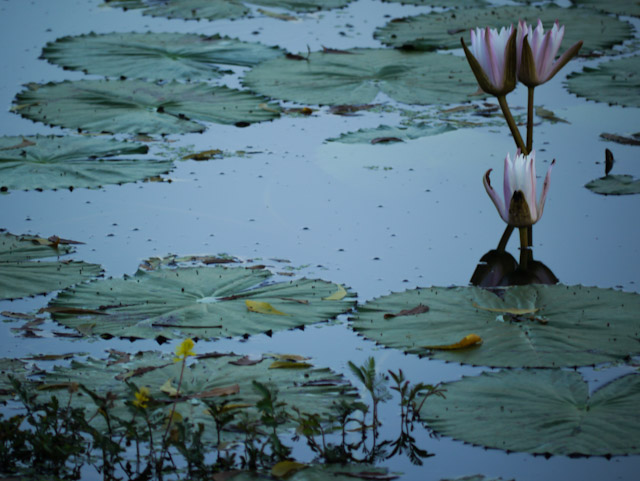 This is our vehicle, admittedly it looks like all the others : ) but it was OK. 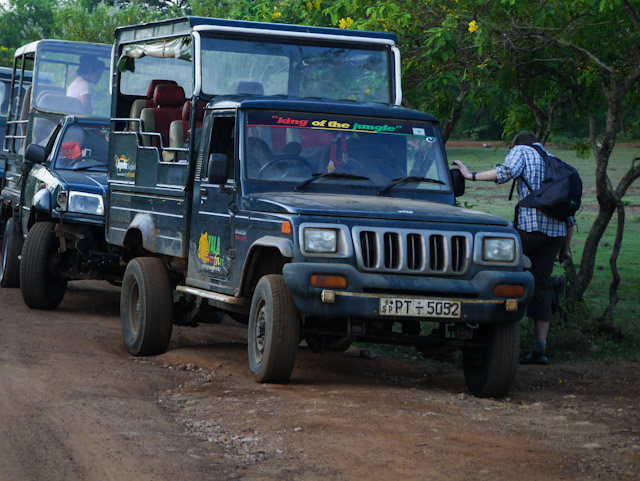 The game drive lasted about five hours before we had to suggest we headed out of the park to meet mid-day check outs. From a time perspective it was good value, it was also pretty good fun, our driver was knowledgeable and engaging and there were loads of birds to. As expected we didn’t see any leopards and for a while I was worried we would not see any elephants either, there are only a hundred and twenty or so and it is a big park. Our guide was just so phenomenally good at spotting thing though, finding small green birds deep in the foliage while bouncing along a deeply rutted track smoking a cigarette seemed to be no issue at all. We saw loads of buffalo, 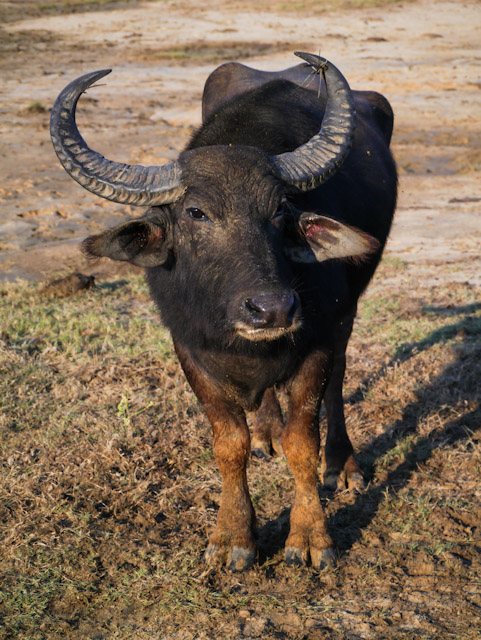 Birds of all shapes and sizes 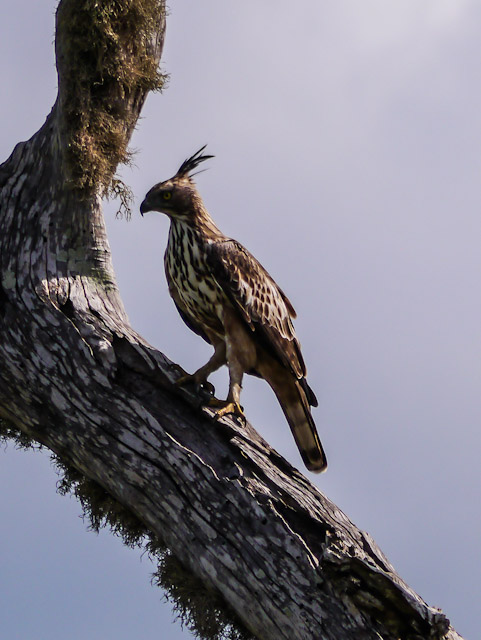 Monkeys for Africa – hmmm, but I guess they already have enough.

And finally as we drove up a small side road we came across a couple of other jeeps parked and found a female elephant with a couple of young. They were all well hidden in the forest and for the first time since I left England I regretted not having my DSLR or a view finder on the GX1, my photos are all mis-focused sadly. The camera was a sod to use in the bright light and I must have accidently hiot some function that was taking bracketed exposures – not what I wanted when it was so hard to focus. Given I was uber frustrated with the camera today, I did get some photos worth keeping, some of them only because I had little choice.

Later in the morning we came across this lone bull far across a distant swamp.

We went to a beach to look get out of the jeep for a bit to stretch our legs and take a break from the spine pounding from the deeply rutted trails. There was a memorial at the beach for the forty seven people who died here during the tsunami of 2004. I cannot comprehend how terrifying that must have been.

After the beach break we asked the jeep driver to take us back to our hotels as is was getting to the end of the agreed paid for tour as well as check out time, mid-day is never going to be prime time to see leopards, or much else so it was silly to bounce around for too much longer.

Back at the hotel we paid bills and took a tuk-tuk to the main bus station in Tissa to get a bus to Tangalle (Tangalla – two different spellings). There was a bus departing as we arrived so we piled on and the conductor shoved our packs under seats – such a good idea and not one I have seen before! It was a fast and crazy two hour ride to Tangalle, this driver used the heavy foot brake more than anyone else and I was constantly flying forward into the seat in front. Benne and I got up and ready to go at the village prior to Tangalle and it was a hair raising ride standing up in a packed bus trying to manage a pack as well as a heavy day bag – and hang on for what seemed like dear life. Road runner – yes, Best Rider – hmmm, hugely debateable…

I had booked myself accommodation in Tangalle as I knew it would be expensive and likely frustrating as it is a major tourist centre. The south coast is where the bulk of the casual tourists go so space would be at a premium. I was absolutely rapped with my choice, it was twice the price as anything else I have stayed in in Sri Lanka, but cheap compared to some countries. It has a pool, air con, a great shower, is clean throughout and best of all has wicked wifi access. I am shallow I know.

Once settled in I took a walk back in to town and finally replaced the jandals (flip flops) that were nicked in Malawi back in November and bought some beers at the local beer bar. I made use of the fabbo internet to Skype with El for a while, it was so cool to actually be able to see her rather than the heavily pixelated image I had last time. I had an excellent rice and curry dinner in the restaurant before retiring to my room and watching an old English TV series “The Beiderbecke tapes” on my laptop.

2 Responses to A game drive in Yala National Park.